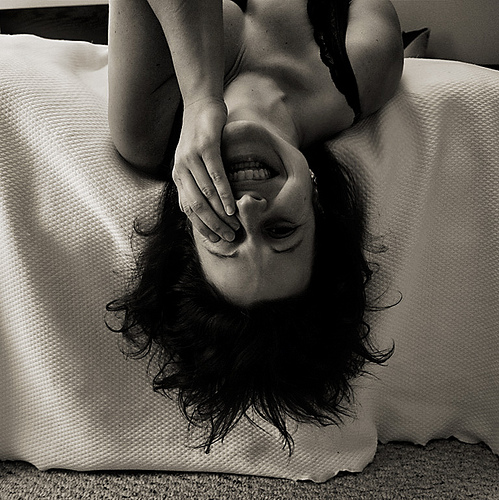 At this point at had been trying to get to the bottom of this perplexing foundation problem for about a month. I reached out to two members of the tribal council, Zoe and Allison. Both recommended things I had already tried, so I was sort of back at GO. Interestingly, they both shared what they were using, Laura Mercier Mineral Powder and Bare Minerals Foundation respectively, both mineral powder foundations. They each had awesome things to say about staying power and coverage. Nevertheless, I was still hesitant because I had used mineral powder foundation in the past from Bare Minerals both original and matte with results that were rather mask like and prompted comments from friends along the lines of “Oh, you look great, wearing makeup today, huh?” Really, not what I want to hear, I don’t ever want my makeup to be obvious or a conversation starter. So I found myself in a Sephora.

I was helped by a really nice, super knowledgeable lady. I told her all of the primers I was using, all of the foundations I tried and shared the results. She confirmed that really at this point I had tried everything, both in primers and foundations. But offered a potential solution, which turned out to be a mineral powder foundation from Tarte.

Tarte Amazonian Clay Airbrush Foundation, something I’d never considered. We found a color that matched my super finicky skin tone, which is simultaneously vampire pale and medium. She also shared a primer that I had also never considered, Prime Time Foundation Primer Oil Control by Bare Minerals, it went on super light, did not feel sticky and bonus it has zero of the ingredients that make me break out. The texture of the foundation was really nice and the coverage felt light, even though its marketed as a full coverage foundation. You can use a tighter brush to spot conceal which is convenient. On the topic of brushs, I have quite a collection, I used my bare minerals Kabuki brush initially but it just never really picked up the product so I did cave and get the Airbuki Bamboo Powder Foundation Brush. Also, the container is smart and you don’t end up loosing power or facing a mess, but its really hard to figure out how much product is left and it takes some skill to get the product on the brush, even when using the Tarte brush.

I liked it over the weekend, but the real test would be on Monday. I used the Bare Minerals Primer under the Tarte Foundation and then when I was done I layered Urban Decay Makeup Setting Spray on top.  The results were pretty awesome, not only did it last pretty much though out the day, I didn’t look like a victim of the night before come 5:30.. True, if I go out after work, I  am going to add more, but on Friday when I had zero time between after work but before going out, I didn’t feel gross just adding more powder to my face. People this foundation is super light.

Finally, a solution. Thank me later. Shop it HERE.